Formed on 13th May 1912 at Farnborough in Hampshire, II Sqn is one of the original Royal Flying Corps units, and has gained numerous distinguished battle honours over its 100 year history. It gained it's photo reconnaissance role during the second world war and has operated numerous types in that role. 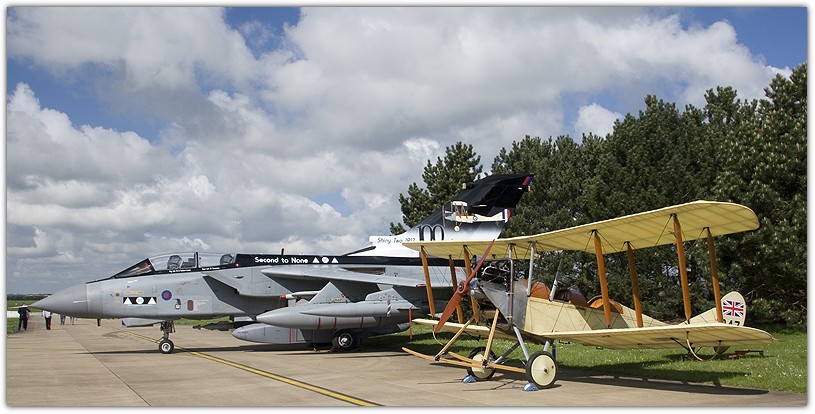 The current type is the Panavia Tornado, which it took into service at RAF Laarbruch in West Germany during 1988. Now upgraded to GR4 these should remain in service for a number of years yet, and are a superb and flexible platform.

After weeks of miserable wet drought conditions in East Anglia, the day of the Centenary celebrations dawned bright with a very unusual coloured sky (blue), and this held out throughout the day. We were introduced and briefed, then allowed to wander freely around the HAS site, with just a small number of other enthusiasts meaning it was a very relaxed and informal event.

II Sqn personnel had done a great job, with the majority of the aircraft having been towed out of the HASes and positioned well in the sunlight. The aircraft were fitted with a huge variety of weapons loads, demonstrating the huge flexibility of the type.

A specially painted aircraft (ZA398) was positioned away from obstructions, allowing great photographic opportunities, and the taxiway had a line-up of visiting aircraft and fully marked up Tornadoes (nice to see a bit of colour).

A treat for some of the enthusiasts was the specially arranged appearance of Tornado GR4 ZD844 on the Compass Pan, currently being serviced by CMU. This particular frame has been a cause for much gnashing of teeth for certain people due to it's apparent lack of sightings over the last few decades, so it's presence today was very much appreciated in some fields.

Following a very relaxed wander around, and some refreshments and a perusal of the memorabilia, we were then guided round the adjacent 31 Sqn HAS site to view their aircraft too.

All too soon, our visit was over and we said our thanks and goodbyes.

Congratulations to Paul for arranging this superb visit, kudos to all the personnel for their work in arming and positioning the aircraft, and a grateful thanks to OC II Sqn for his permission in allowing the visit to proceed.