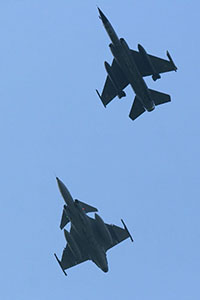 The Tactical Leadership Programme series of exercises provide a great opportunity to see various aircraft types from many countries operating together. Each exercise usually takes place over a 4 week period, and they are held around half a dozen times a year, usually at Florennes in Belgium.

There are many decent websites that will provide information about the TLP schedules and history, so there is little point in me repeating that information here. Check out the Scramble TLP section, and the Florennes Aviation Society for further details.

For the UK based enthusiast, Florennes is one of the easiest locations to get to on the continent, and a good day here is easily accomplished during a day trip across the channel. Belgium and Northern France also have a number of Wrecks and Relics locations within easy reach too, so you can always pick up a few extra frames on a trip like this.

Firstly, check out the schedules to find out when a TLP is occurring (I would recommend the last week of the exercise as there are usually more aircraft present).

Next, check the long range weather forecast. Look for the best days, however Florennes is notorious in having its own little micro-climate which can be different (and change very rapidly) from other nearby Belgian towns and cities like Charleroi.

Also check out if there are any other events occurring in the area, VIP gatherings at Brussels, exercises or exchanges at Cambrai, Reims, Kleine Brogel etc, and try and tie them in too.

Then, check out European Wrecks and Wrelics, or the EuroDemobbed website to find other interesting locations that can be incorporated into your route planning.

Get a few like-minded individuals together, and book a channel crossing for your vehicle. We usually use the Eurotunnel as it saves an hour each way, and has slightly more flexible timings than the ferries.

Aim to get to Florennes from around 11 am or so local time, as the TLP usually will not launch until lunchtime (take some welly boots too as it may get muddy). The aircraft will usually have returned from the mission by 14:30 local (unless it involves air-refuelling), so you can hope to be away by then.

So, our trip for March 2007 looked good as we saw the types involved. We quickly managed to fill 2 cars with a large contingent from the Suffolk Division of WAG, and agreed a suitable date (the Wednesday of the final week is often a winner). Reims-Champagne in France also came onto our hit list as there was an exchange of Swedish Air Force JAS-39 Gripens from F17 at Ronneby in progress until the end of the week.

A 3 am departure from Suffolk got us checked in to the Eurotunnel terminal at Folkestone around 5am, giving time for breakfast then an 05:50 departure. A 35 minute channel crossing got us away from Calais by 07:30 local, heading due south on the Autoroute straight to Reims.

Despite a high speed (110km/h "honest guv") blowout on one of the vehicles, we stil got to Reims before 10am, in time to see a few aircraft launching. The guys in the back of the car had spent most of the trip with the SBS on, and were logging civvy trans-European "dots" like they were going out of fashion!

We gave ourselves until around 11am here as we wanted to get to Florennes in time to take photographs, so after seeing a few waves of Gripens and Mirages land we headed off again. We departed northwards following our trusty (and absolutely invaluable) GPS sat-nav systems, and all the time the SBS freaks in the back seats were filling their notebooks up with more dots and trails.

Florennes was reached around 13:00, just as the last aircraft were departing. As expected they were using the "wrong" runway (08L), so we drove round the base to the Western end to get in a good position for them returning.

After the TLP mission had returned, we were ready to depart towards the coast, and under normal circumstances would have had plenty of time to check out Brussels, Ostende and/or some other locations on the way back to get our scheduled 20:00 train back from Calais. However, our off-road antics got a bit fraught as one vehicle got its exhaust pipe snapped in half on the bumpy track necessitating a sedate journey back home. This was not the end though, as the other vehicle then managed to get grounded on a "slightly uneven" part of the track, and was only eventually freed by some judicious steering by the driver, allied with the brute force and ignorance approach from the other seven members of the party.

So, we took the stance that we had pushed our luck enough for the day, and should head back at a more leisurly pace, perhaps even getting to the Eurotunnel terminal in daylight for a change. This proved to be so, and we actually caught an earlier than planned crossing, eventually arriving back in Suffolk before 10pm (very sociable indeed) following a stop in Kent for some food and drink.

This trip took in Reims-Champagne in France, rather than the more customary Belgian or French Wrecks and Relics locations, but apart from that was a fairly typical example of this type of day trip. As for costs, as well as the Eurotunnel return fare, there were some toll charges, plus the cost of the fuel (about 800 miles driven in total). With 4 people per car it all worked out to be only £35 per person, not too bad for the variety of aircraft seen.

Hope that gives you quick insight into how easy it is to do a trip like this. With a little bit of planning, some like-minded and flexible travelling companions, and a decent sense of humour under adversity, a great day trip can be had by anyone.