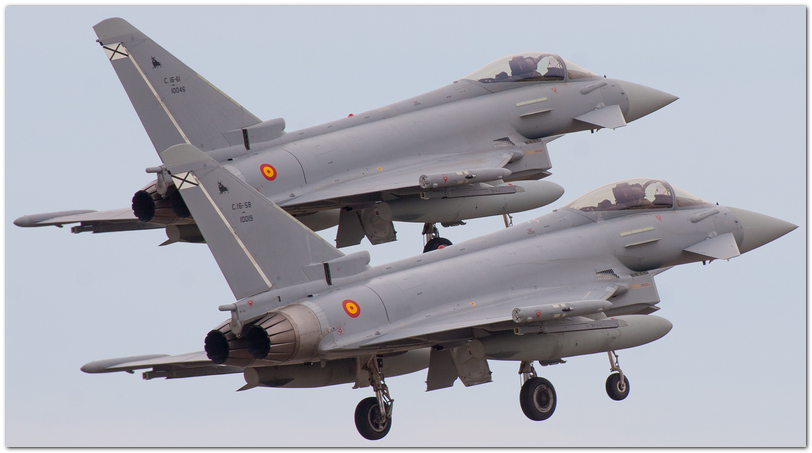 Ever since the Tactical Leadership Programme moved from Belgium to Spain, visits to them from the UK have been less frequent, as it is no longer just a simple day trip across (or under) the English Channel.

However, the TLP still offers a great collection of varied fighter and other aircraft, and by being based in central Spain has chances of much better weather conditions than the two previous Northern European homes at Florennes and Jever.

All is not lost though, and a day trip to Albacete from the UK is still very possible. Check out the options from the low-cost airlines about flying from Gatwick or Stansted or Luton or Southend, into Madrid or Valencia or Alicante, and you can see that there are plenty of choices. And if you want to extend the trip for a couple of days, there will be even more choices available.

When TLP was at Florennes, it was often at the mercy of typical Northern European weather, and missions could easily be scrubbed if the airfield, or target, or en-route weather wasn't suitable. In Spain there is much less chance of the mission being scrubbed, though lack of SAR helicopter availability over The Mediterranean Sea is one possibility.

So, with the good prospect of sunny weather, a few days were booked in a coastal resort, giving us a couple of chances to visit Albacete if it proved necessary. Spanish security forces around Albacete are becoming much more used to seeing photographers around the airfield now that TLP has been operating from here for a few years, and as long as you are sensible and don't spend long anywhere near the fence you should have no problems. There are well used spots under the approach at both runway ends that offer good photo opportunities without incurring the wrath of local officialdom.

Albacete itself is situated just to the south of the town, and has a little used civil terminal to the south of the runway. Be aware that changes in runway direction are not uncommon, and this means a quick repositioning from 09 to 27 or vice versa may be necessary, I found taking the route through town is the least problematic.

The base is home to Ala 14, with 2 squadrons of EF.2000s and these usually participate in TLP, as well as fly their normal local training missions. There is also a large maintenance facility located here at the Western end of the airfield, Maestranza, and this has a large storage compound, still containing a large number of withdrawn Mirage F.1s. Airbus Helicopters has an outfitting facility to the South of the runway, and brand new helicopters (Tigers, NH.90s) can often be seen being flight tested here. Finally, there are a number of preserved aircraft and helicopters scattered around the airfield at various locations.

The TLP course in May 2017 comprised the usual assortment of NATO fighter types and units, but unusually also hosted USAF F-16s from the 388th Fighter Wing at Hill AFB in Utah. Italian, French, German and Turkish participation was also included, as well as the previously mentioned Spanish involvement.

Arriving at the base around breakfast time, the morning activity started off with some practice approaches by CASA.101s and Enaer T-35s based at San Javier. The local EF.2000s flew a sortie as well, and the French Air Force put up a Rafale to fly DACT against a Torrejon based Spanish Air Force Hornet. The Hill F-16s also went out on a training sortie, whilst there were movements from some CL.215 water-bombers, and some C.295 transport aircraft.

An Italian Air Force KC-767 tanker departed, and a Belgian C-130 Hercules paid a visit, presumably delivering supplies for the TLP beer call. Airbus Helicopters flew a couple of test flights, one from a Tiger, and one from an NH.90.

In the afternoon, the TLP mission launch was preceded by the departure of the NATO E-3 AWACS, after which the TLP fighter could be heard starting up and taxiing for departure. After about 40 minutes of departures, there is about half an hour of quiet time until the mission aircraft begin returning. This gives you enough time to take a quick look at the TLP ramp to see what aircraft were left behind.

Another 40 minutes of arrivals and all the mission aircraft are safely back on the ground, and a good selection of aircraft will have been seen and photographed in, hopefully, decent weather.

Then back to the resort for drinks and dinner......

Active aircraft noted during the day.