Every spring the Spanish Air Force host a DACT (Dissimilar Air Combat Training) exercise, to train pilots in the art of operating against aircraft of types different to their own. 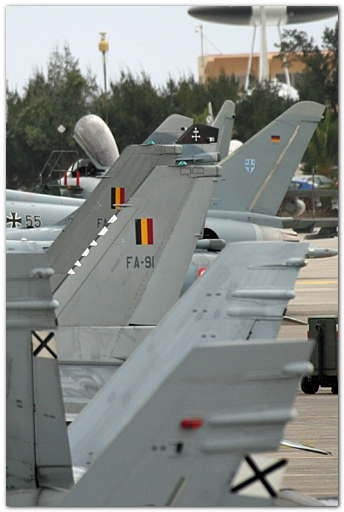 In recent years, these exercises have been held in the non-congested airspace around the Canary Islands, a Spanish territory in the Atlantic Ocean, 750 miles South West of the Spanish mainland, and only 100 miles off the coast of Western Sahara.

The Canary Islands themselves are a series of volcanic outcrops, and are very popular holiday destinations for European tourists looking for a bit of Winter sun. Gran Canaria is one of the larger of the Canary Islands, and the main airport at Las Palmas is also the main military airfield, known as Gando.

Gando is home to a SAR (Search and Rescue) detachment of Super Puma helicopters, as well as hosting a temporarily deployed CASA 295 which is configured for SAR operations. The main operating unit at Gando is Esc 462, operating a number of F-18 Hornets from the HAS (Hardened Aircraft Shelter) site located in the South East corner of the airfield.

An invitation to attend the 2016 DACT was duly accepted, and flights were arranged into the co-located Las Palmas international airport. This is a very popular destination, so flight availability was easy and very reasonably priced. It is around a 3.5 to 4 hour flight time from the UK, and flights are plentiful from many UK (and other European) destinations.

After checking in with the base, we were escorted to the balcony area above the Esc 462 maintenance hangars, from where a great view could be had over the busy flightlines. In 2016, as well as the based Hornets, there were plenty of visiting squadrons in attendance. Ala 12 and Ala 15 both sent more Hornets, and Ala 11 supplied Eurofighters. Foreign participation this year included further Eurofighters, this time from the Luftwaffe's TLG-73 at Laage, as well as Belgian F-16s and French Mirage 2000s. Locally based support aircraft incuded A-4 Skyhawks, Learjets, and a NATO E-3. Other Canary Island bases hosted transport and electronic warfare aircraft, whilst at Moron AB in mainland Spain some USAF B-52s were also flying missions in support of the exercise.

A typical mission sees the participating aircraft being pre-flight checked by the groundcrew an hour or so before launch time. After the aircrew have gone through the mission planning they are escorted out onto the busy flightlines by an engineer who makes sure they get to their assigned aircraft correctly. The aircraft start and taxy out in turn, blasting off from one of the 2 parallel runways, whilst tourist and other travellers use the adjacent runway to arrive and depart from their holiday destination. 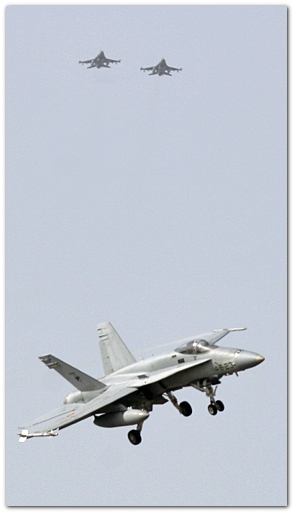 After the exercise missions conclude, the participating aircraft return to Gando, slotting their returns in between the regular scheduled commercial traffic. The returns usually consist of an overfly of the runway followed by a break to land, usually on the Easternmost of the two runways, as that is the closest one to the military side and will cause the least congestion with the civilian traffic, which predominately operates from the Western runway, closest to the airport terminal.

In conclusion, this DACT exercise offers a great opportunity to get some Winter sunshine, see some good action, and dust off the camera for the forthcoming season.

Thanks must go to the organisers at Gando and 462 Escuadron for making this opportunity available.