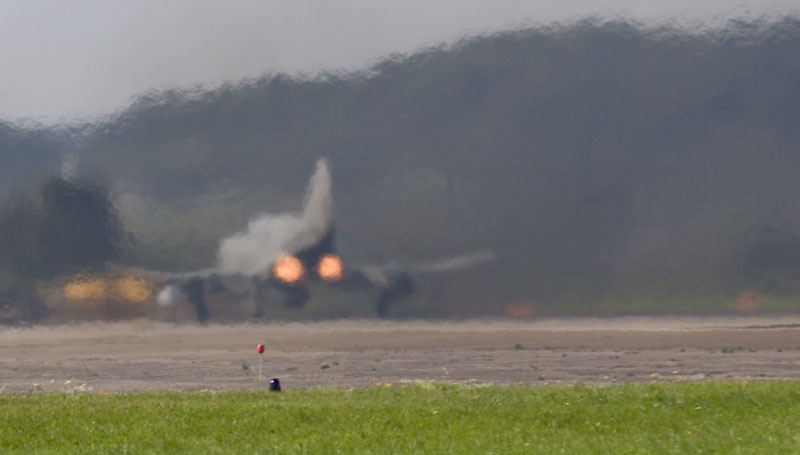 Courtesy of the fine folk at RHAG, an invite around the Eurocopter facility at Donauworth in Bavaria was eagerly accepted by much of the Suffolk Divison of WAG. A check of the calendar showed that the German Flight Test establishment (WTD-61) at nearby Manching-Ingolstadt was holding its 50th anniversary open day, so a good basis for an extended trip around the Munich area was established.

A 5-man team from Suffolk were joined at Stansted airport early on Wednesday morning by a Midlands train driver so at least WAG's core membership was represented on the trip. We had planned a 4 day trip to allow us to get to as many places as possible, and decided upon flights in and out of Salzburg to make best use of the available time.

En-route to Salzburg we overflew Ramstein in clear sunshine, noting 8 based C-130s, and 1 visiting C-130, as well as 8 C-5/C-17s on the main ramp. This was a planned military-only trip, so on landing at Salzburg we hurried those of a civil persuasion past the displayed ex USAF C-47 (42-93189) through to the rental car collection. A 7-seater vehicle gave the 6 of us adequate space, even though we had a reasonable amount of luggage as we were on a moderately extended stay.

First target was Neuburg Kaserne to get the pole-mounted F-104G Starfighter (23+57) here, the co-located F-86 is still away at the main airfield getting refurbished. A quick stop in at the airfield to check out the visiting aircraft before heading onwards.

Kaisheim was next, to get the displayed UH-1 (73+69) which is actually on the bypass around the town rather than the old road which goes through the centre of town. The Schwabisches Bauern & Technik Museum at Seifertshofen was our next stop, and this place has a rather eclectic and sometimes surreal collection of artefacts, memorabilia, and various bric-a-brac inside. However, mostly outdoors, a reasonably extensive, if rather neglected, selection of airframes can be found.

This was a good end to a long day, and we arrived shortly at our nearby hotel ready for a decent meal and a few drinks to unwind.

Thursday dawned and everything was a little foggy. Last nights over indulgence was eased by the sumptuous ETAP breakfast and we drove south, heading for Landsberg. Unfortunatey as our fog cleared, the weather got worse and visibility was so poor by the time we got to Landsberg that it was impossible to even see the gate guard aircraft here from the gate! So, a quick re-jig and we headed to the light aircraft field at Jesenwang.

The fog cleared quickly so we headed back to Landsberg, just in time to see a Greek AF Hercules land as the sun broke through.

We had decided to only spend a short time here as some of the party were keen to get to Lechfeld as they'd been inspired by the sights and sounds of the JbG-32 Tornadoes over Augsburg the previous evening, so we made our way there via the Lechfeld Schwabstadl Kaserne to catch the preserved F-104 (21+36) and F-84 (DD+367). At Lechfeld itself we struck lucky as we caught a few missions as they returned for lunch.

Lunchtime generally means a bit of a lull, so we set off and used the time to make our way back up to the JG-74 Phantom base at Neuburg.

With good weather still, we decided to head off and explore some further afield bases to get an idea of the layouts. The German Army base at Niederstetten was quiet, with just a single Bo.105 seen, however a large amount of construction work was taking place, with many new large buildings being built, so it looks like the base may be expecting NH.90s in the future. The US Army base at Illesheim had around half a dozen AH-64D Apaches parked up near the control tower, but they were too far away to read off. Finally, the US Army base at Ansbach looked deserted, perhaps they are deployed somewhere a bit warmer.

So, that was us for day 2. A return to the hotel and a rendevous with the RHAG crew, and we made our way back to our favourite eaterie. I'm not sure they were really expecting such an influx of Brits, because after running out of steaks, they eventually ran out of Becks too! More beer back at the hotel resulted in some semi-naked drunken dancing by our "Northerner", the video evidence has been retained on file in case it is needed in the future!

Friday, and with a couple of the party still a little "tired and emotional" from last night, the RHAG organised visit around the Eurocopter facility at Donauworth was the main agenda. We headed there via Augsburg airport, as we had been given a heads-up by Addo (thanks for that) that the Egyptian Government King Air (SU-ZAA) was under maintenance. The long term resident P.149 (91+91) was still in its usual place (AS ALWAYS!)

Eurocopter have strict rules regarding visits, so I'll not report anything. Suffice to say that the facility is very impressive, very busy and a huge employer in the local area. After a good lunch there we also visited a nearby Eurocopter facility at Reidlingen where further helicopters are being prepared.

After saying our goodbye's and thankyou's, we drove into Munich to visit the Deutsches Museum. This is located on an island in the river right in the city centre, and we parked easily enough in a multi-storey car park a couple of hundred yards away.

Feeling fairly satisfied with our day we headed back towards our hotel in Augsburg, but en-route decided to try our luck at Furstenfeldbruck. This former Luftwaffe Alphajet base is now a civil airport and flying club, but has plenty of ex military aircraft still located here.

So, back to Augsburg again for our final night, and we decided to go out in style. Our restaurant had obviously re-stocked, because we had no problems tonight. After the meal we decided on a few rounds of Schnapps, Tequilas, and Whisky, and our hosts even threw in some complimentary drinks themselves, very decent indeed. Back at the hotel, a few more beers, then the usual fight with a pot plant by one of the more aggressive team members before bed.

Saturday morning, and boy did last nights antics result in a very sorry state of affairs! Black eyes, cuts and headaches were abundant, so needless to say the WAG wagon was a bit sombre and quiet en route to the airshow at Manching, and it took some time before the spirits of certain lightweight individuals started to recover (no names, no pack-drill, detachment rules etc!)

Following a liquid lunch (well, it is nearly Oktoberfest) at the airshow, we departed towards our third museum of the trip. The Flugwerft Schleissheim at Oberschleissheim has fairly substantial collection, as well as an adjoining airfield which had an ex Russian AF Yak-52 RA3340K (c/n 833701, ex 555 black) (as well as loads more tin!).

The MTU aero engine facility at nearby Munich-Karlsfeld has Tornado 43+86 preserved at the gate, and our final port of call on the way back to Salzburg was to see the ex German AF MiG-21 463 at Guttenburg.

Salzburg Airport then afforded some time for the civvy spotters to get a quick fix before our late night flight back to Stansted, although the sharp eyed ones managed to read off the ex-USAF Stearman (42-16869) OE-AMM inside the Red Bull Museum.

Thanks go to Addo and the rest of the RHAG crew for the invite and company, as well as the rest of our party for the entertainment value provided.

Hopefully a similar trip can be arranged for next year, I'll be first on the list.